The rich history of the Brooks is one with many ups and downs, and it is an honor to be a part of its revitalization. We hope that the men and women, whose dream was to bring brightness to their town, will be pleased with our efforts to make the Brooks and Oceanside Theatre Company a regional cornerstone for the arts.

The History of the Sunshine Brooks Theater

Hattie Hazel Wolff was born in Louisiana, on May 24, 1908. Her nickname in high school was “Sunshine” and according to her high school yearbook her ambition was “To work cross word [sic] puzzles.” Hattie married William Brooks in 1929. An article about the Brooks-Wolff wedding from The Birmingham News (Alabama) wrote: “Miss Wolff is a delightful member of the young Jewish fashionable contingent and after being graduated from the exclusive Fairmont School in Washington, D.C., completed her education at the University of Wisconsin.”

The following year, the Brooks’ moved to San Diego where William became the proprietor of what is now the Embassy Hotel. William and Hattie made the hotel their residence.

Oceanside’s Margo Theatre opened on November 20, 1936. Although the theater was originally named the Rancho Santa Margarita Theatre, the name was quickly shortened to the Margo due to marquee space restrictions.

“We say that this is your theatre, as Oceanside is your city and ours. We feel much pride in having carried to successful completion this building. Our destinies are cast with the destiny of this community, and we are to have added to the beauty and brightness of this, our home.”

In 1944, the Brooks’ purchased the Margo Theatre along with two other partners. But by 1955, the lease expired and its doors were closed for a time. Erwin Sklar took over operations of the theatre, remodeled it and changed the name to the Towne Theater. The Towne played films, double and triple features through the 1980s. Sklar would go on to be elected mayor of Oceanside in 1957. 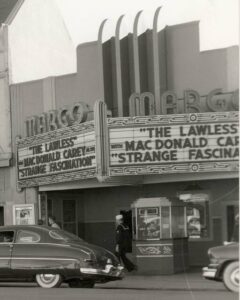 By 1990, the Towne Theater closed its doors again due to years of losing its audiences to newer theaters. The Oceanside Martial Arts Center took up residence in the theater space soon after.

In 1993, Hattie Hazel Brooks granted her share of the Towne to the City of Oceanside Community Development Commission (OCDC). The Procopio Family Trust, sold its share of the theater to OCDC the following month for $66,600.

In 1994, OCDC voted unanimously to rehabilitate the Towne Theater and adapt it to a live performance community theater. The name of the theater was changed to the Sunshine Brooks Theater, as per Hattie’s wishes. A local group of thespians moved into the building as the Pacific Coast Players in 1995. The first performance in the new Brooks Theater was on March 18, 1995, “Comedy Under Construction.”

1998, the Oceanside City Council voted unanimously to keep the Brooks Theater as a live playhouse, and planned to raise $1 million for the improvements needed.

In early 2003, the theater was closed yet again due to budget cuts. In early 2005, New Vision Theatre Company moved into the Brooks with John Kalb as Artistic Director.

In January of 2011, Oceanside Theatre Company (OTC) was formed and were granted management of the theater for the next five years under Artistic Director Christopher Williams. OTC opened their first production, “Jacob Marley’s A Christmas Carol” in December of that year.

In 2016, Chris Williams left OTC to become associate artistic director for North Coast Repertory Theater. A year later, Dyhana Dahl briefly took over leadership before being replaced by current artistic director, Ted Leib, in 2017. OTC rebranded and created a new mission and vision. And after the forced closures of 2020, OTC’s board of directors cemented their future in the heart of downtown Oceanside with a new 20-year lease with the city, and hired their first managing director, Alex Goodman, in 2022.

The Towne was one of three downtown movie houses that operated through the 50’s, 60’s and 70’s.

The city of Oceanside acquired the theatre in 1993 from Hattie Hazel “Sunshine” Brooks, from whom the current name originates. A local group of thespians answered a call from the city in 1995 and moved into the building as the Pacific Coast Players. The Players called the Brooks their home for five years. The theatre went black for a year during construction. New Vision Theatre Company managed the Brooks for six years after the theatre construction was completed.

Oceanside Theatre Company formed in January of 2011 and was awarded management for the next five years.

In 2016, a new OTC Board of Directors and Artistic Director were appointed.

Oceanside Theatre company rebranded and a new vision and mission created along with a new strategic plan.