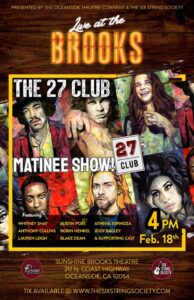 The Six String Society’s 27 Club illuminates the lives and music of an infamous group of musicians, in which all the members share at least one thing in common – they all died tragically at the age of 27.

Set in a mythical Greenwich Village apartment circa 1969, the candles burn late into the evening as the stars of this dubious club begin to arrive in the “Living Room.” One by one, they each perform their songs culminating in one triumphant group number together at the end.

Reviews for The 27 Club

“A wildly entertaining show from start to finish as it weaves together theater and history along with some of the greatest music ever performed!” – Laughlin Entertainer Magazine
“Stellar talent, great staging with perfect ambience. If you love music, then 27 Club is a must-see.” – Peter Oliver, Producer, Gator by the Bay Music Festival