Gunhild Carling – Live! at the Brooks 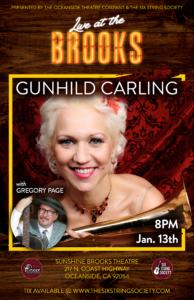 Born to a family of musicians in 1975, Carling’s home life was filled with a variety of artistic endeavors including acting, circus tricks, dance, music, Vaudeville, and novelty. Carling became infatuated with jazz music and instruments at a young age and is now one of the world’s truly great jazz performers. An incredibly dynamic performer, she has toured with the Post Modern Jukebox and played for audiences around the world, including the King of Sweden.

Now residing in northern California, she continues to tour with her family band which has included her sister Gerd, brothers Max and Ulf, and mother Aina backing her up over the years. Together the Carling family has recorded five albums.

“Gunhild is a shimmering presence, and she performs with vivacious flair and boldness!” – Jade Manson,  Arts News
“Gunhild Carling, Swedish musical sensation performed an outstanding set of swingin’ jazz, which consisted of a mix of originals and jazz standards.” – Big City Rhythm and Blues Magazine
“With frontwoman Carling leading the way, the entire family of musicians, singers, dancers, and more (even juggling) presents a nightclub experience that defies description. The fans always show up for Gunhild and co,. and with good reason, too: They are simply marvelous.”  – Broadway World

“Earlier tonight, 10-8-2022, I saw Gunhild Carling playing in Phoenix AZ and it was one of the best concerts I’ve ever been to! Seriously, this event was overflowing with the magical energy of jazz and musical talent in the air. The whole band was producing a constant positivity that was so strong, it had an effect on the entire building! I didn’t see a single unhappy person. They played lots of great songs, and each one had its own unique feeling to it. It was all done incredibly well. Gunhild was phenomenal on the trumpet! Gunhild also had the Bagpipes, Harmonica, Recorder, and Slide Whistle. Idun’s singing, dancing, Trombone and Saxophone playing were really great also. I really enjoyed everything so much!! Thanks again Gunhild and Band!!!” – Daniel Langlois

“What an exhilarating breath of fresh air!! Swing, jazz, soul, lively energy, punchy rhythms, brass, percussion, amazing vocals, and amazing talent wrapped in a wonderful Art Deco mindset that I lust after. This is fantastic!! Musicians with real talent….extreme talent coming together in such harmony. I’m thankful for people that go beyond to make our lives better.” – Carlos GM